“My time at the primate and manatee rehabilitation project was a dream come true.  It allowed me the experience of working extremely closely with monkeys and manatees in a way that I never would have imagined.  When I think back to my placement, I remember most the relationships I built with some of the animals at the center. 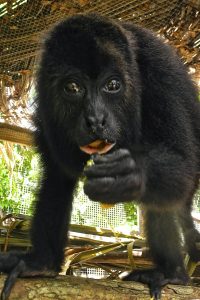 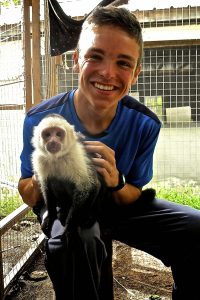 Nikki the capuchin was the first monkey I met while at the project.  That little monkey has more personality than half the people I’ve ever met.  She was confiscated while she was being smuggled across the Belize border.  Because capuchins are not native to Belize, she cannot be released.  As a sanctuary animal she receives lots of attention and play time with the volunteers.  Nikki is high energy; she loves to jump on you and bite when she gets excited.  She requires a lot of patience.  However, the relationship that formed between Nikki and I was amazing.  She became quite affectionate and loved to groom me and be groomed in return.  She was a blast to build a relationship with.

Sweetie was a twenty-year-old howler monkey that I cared for during my placement.   She was quirky and hilarious.  For example, she only liked red and orange fruits.  She liked water for a dish, not a bottle.  She loved Pedialyte, but would give me a dark stare if a dish of coconut Pedialyte turned out to be plain water.  She had been a pet for most of her twenty years.  This fact combined with her old age makes her ultimate release unlikely.  However, she is lucky enough to live the remainder of her life in the care of the team.

When I first arrived there were three manatees: Rhamases, Duke, and Khaleesi.  I was soon trained how to bottle feed both Rhamases and Khaleesi, which was a dream come true for me.  I’ve always had an obsession with manatees.  Each of these manatees has their own story, and I became attached to each of them.  They each had their own personalities and quirks.  Rhamases tended to be a little frisky at times, Duke was shier and more cautious, and Khaleesi was a little princess.

Towards the end of my stay, we received a call about an orphaned calf near Belize City.  I was lucky enough to join Paul and Zoe in picking up the calf.  The calf was in a lot of pain and 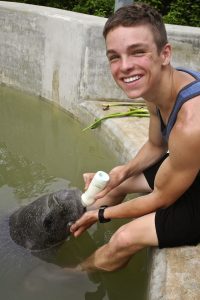 struggled to breathe.  His outlook was grim.  However, after many days of 24-hour watches to support him in the pool and some love and care, the little boy improved.  He earned the name Mitch.  Sharing my name with this little baby is magical.  Being a part of his initial rescue and rehabilitation was one of the most memorable experience of my trip.

The two creatures I bonded with most were Innie and Vicki, the center’s youngest baby howler monkeys.  Innie was found at the base of a tree, his mother assumably shot by poachers.   Vicki was found in a small kennel in someone’s backyard who planned to keep her as a pet.  At the project, these babies required constant care and attention.  Another volunteer and I became their surrogate parents.  We spent around 12 hours a day with them: feeding them, playing with them, walking them around the property, and building their confidence.  They soon saw us as their parents, and we saw them as our kids.  Each had their own hilarious personalities.  Innie was a teddy bear.  He loved attention, but could become a little rambunctious.  He ended up being quite the wild child, throwing temper tantrums before his naps and when not allowed to climb a specific branch.  However, he was very affectionate and such a goofball.  Vicki was a spunky and confident little girl.  Younger and slower than Innie, she still had an iron will and was determined to go where she pleased.  By the time I left I truly felt like these little monkeys were my own babies.  I miss them so much, but I’m excited for their future and eventually as wild monkeys in the jungle. 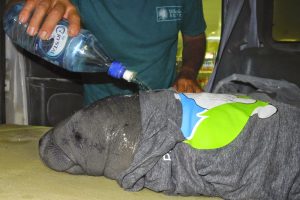 I also formed some amazing bonds with the other volunteers.  It was really neat to be surrounded by people who have a similar passion for animals and wildlife.  We were all there for the animals.  I got to meet and become really good friends with people I never would have met otherwise, people from all over the world.  I was not prepared for how close I would get to the other volunteers.  I’m definitely staying in contact with many of them.

This placement also helped confirm that I really do want to work with animals as a career.  There’s nothing I’m more passionate or excited about.  The project allowed me the special experience of interacting so closely with magnificent animals that have an exciting future as wild creatures again.  I thank Global Nomadic for helping me to discover this internship and making it happen by helping me manage all the details.  It was the experience of a lifetime.”