I found out about the project and Global Nomadic quite unexpectedly. I had a last time change in my plans for summer that did not depend on me. Eventually, I was left in Italy all alone without any suggestions what to do here. So, I hit the Google to make myself useful. I am a professional ornithologist but since my years in university I always wanted to study cetaceans. And this project looked like a good place to start. I was lucky that there was still one position left because in August everything is usually fully booked in Italy. Thus, I didn’t do any planning in advance, I just booked it in a week before my shift started. 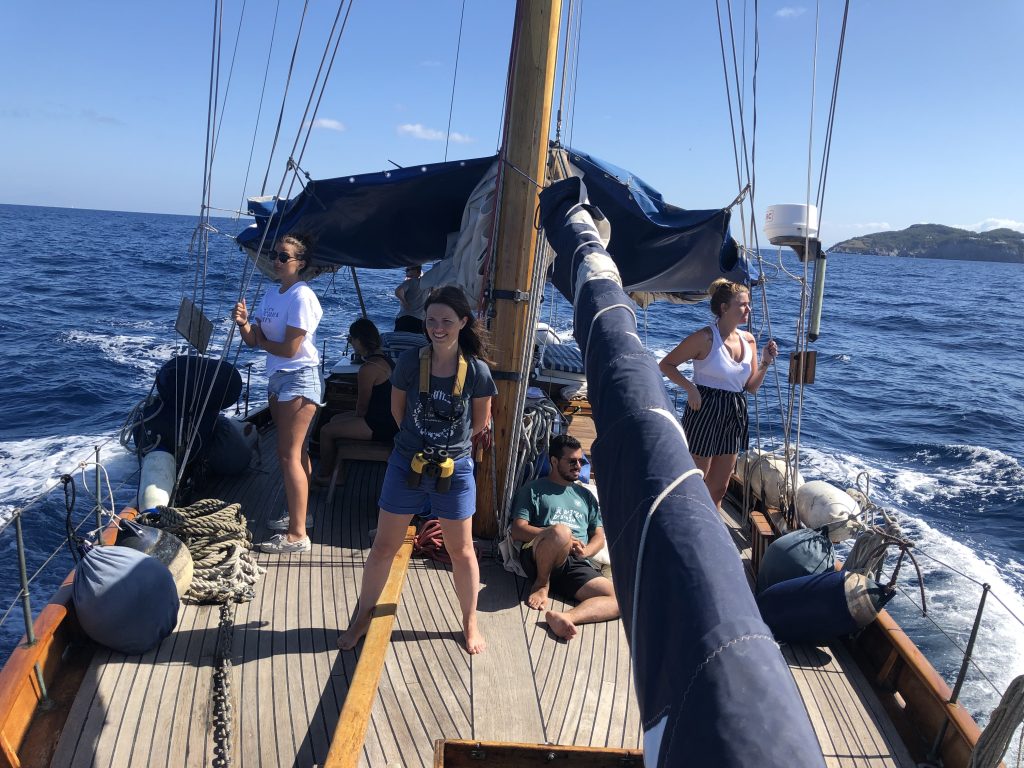 After I had paid and confirmed my booking, project manager Barbara had sent me a pdf with nice and detailed description of the project and conditions. That’s where I learned that I have to bring my sleeping bag or bed linen with me. In my opinion, the details like this should be mentioned from the very beginning, because not everyone is planning their trip in advance. As I learned later, there were many people coming with absolutely no idea about this… But I was lucky again because there was one spare sleeping bag on board and I arrived earlier than the others. 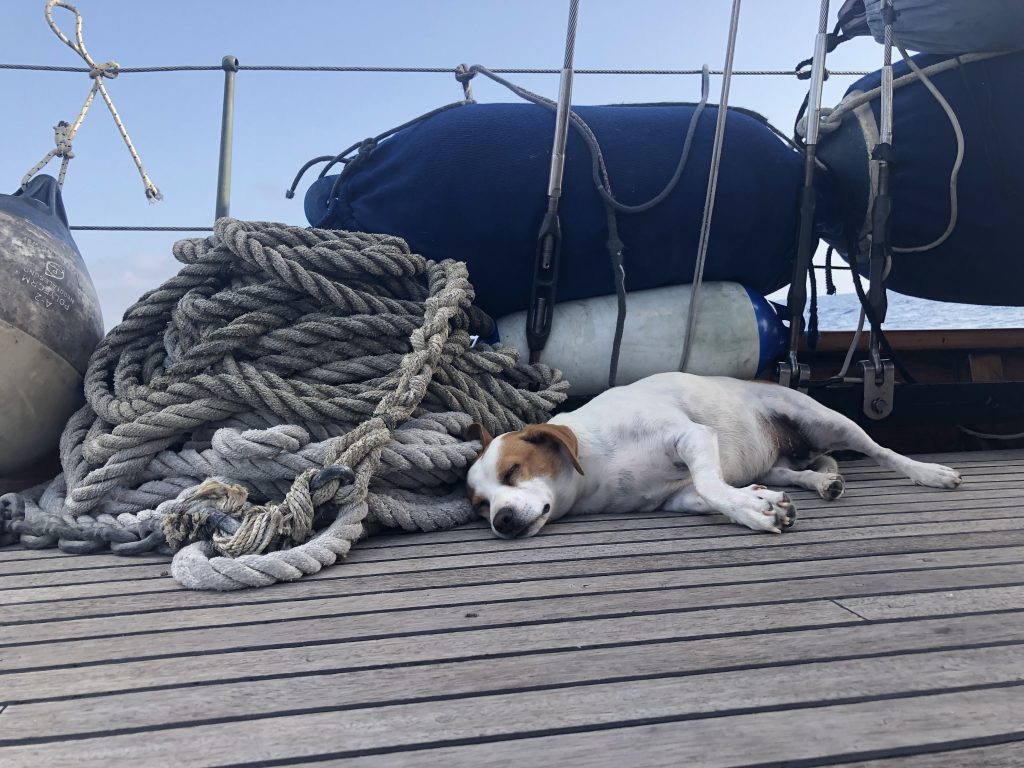 I arrived on Ischia 4 days before my shift and went for a run the next evening. That’s when I’ve seen the project boat for the first time. I hesitated because there was another group of volunteers, but still decided to say hi. And… stayed there until late night, just talking and talking. I already had some background about cetacean biology and was happy to discuss some interesting details about local fauna. The crew and the volunteers were absolutely amazing. After that I came to the boat every evening to spend time with the guys. On Sunday they had a day off and we went to relax at the thermal spa nearby. 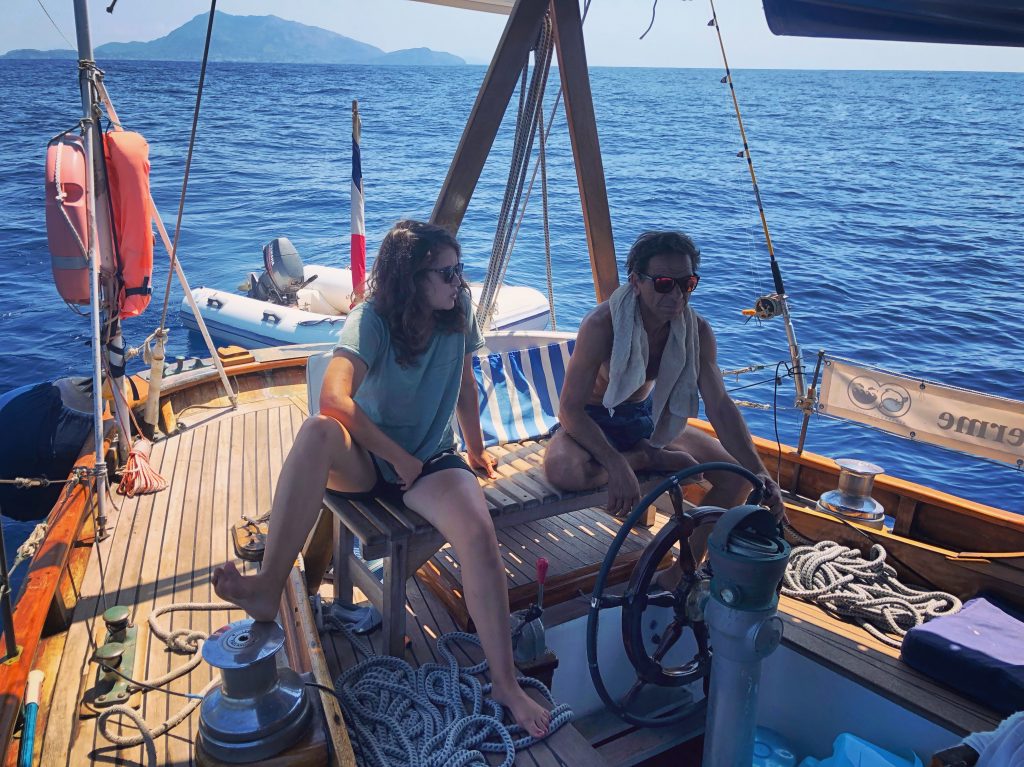 Thus, when I finally checked in with by bags, I was already familiar with everybody and extremely excited about my week. It was quite hot, so I slept on the deck under the stars which was great and romantic. But remember that August is a national holiday in Italy! So it was quite hard to sleep because of the bright lights, traffic noise, loud music and fireworks at 2 AM (and you have to wake up at 8!). In my opinion, during these days it is better to stay overnight in a more quiet place, like another bay. They said the skipper Angelo does it sometimes (not on my week). And during the day we had the skipper’s girlfriend on board with a small baby that was very loud. This was actually the hardest thing… In my opinion that should be also mentioned in pdf because not all the people could really tolerate baby cries… I had constant headaches.

So, if you want a quiet week on the ship among the sea, this could not be the best project to choose. 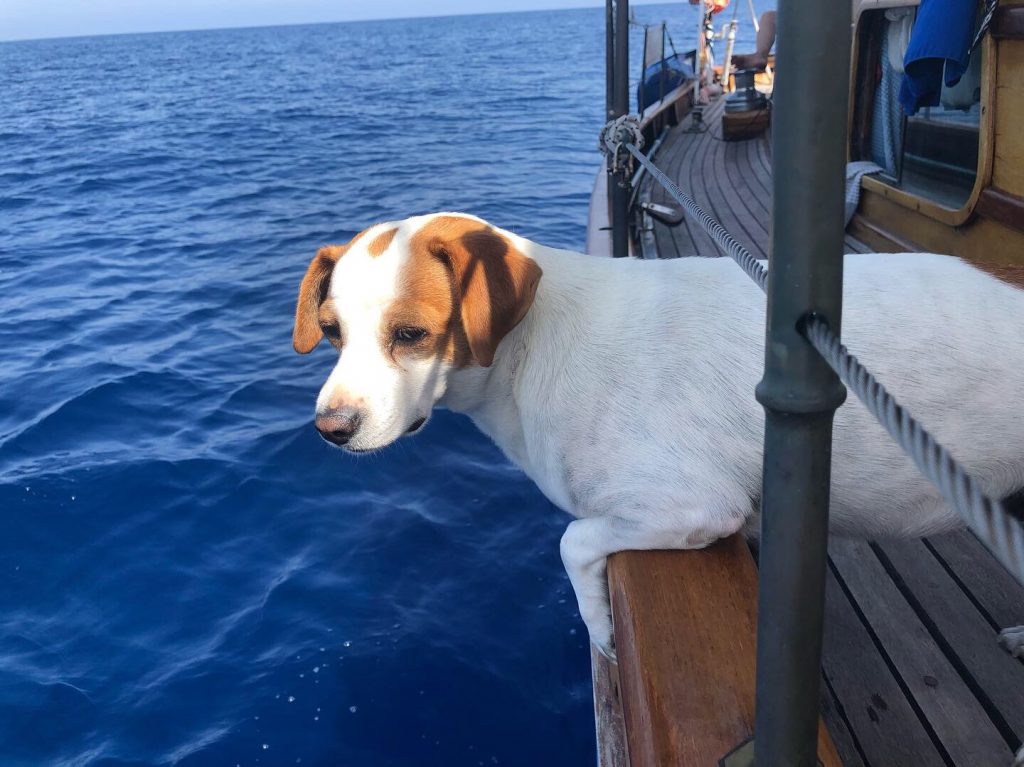 All the food is cooked by a skipper who is indeed an excellent cook. Every day research assistant with volunteers go to the market to get fresh bread, fruits and vegetables that are very good! You eat four times a day. First, breakfast – you just grab something while you do your cleaning duties on the boat before departure. Then, at about 12 AM skipped cooks bruschetta, then pasta for lunch. Then we come back to the harbor and you have dinner. After that you have free time. There is also plenty of excellent home white vine on board, so usually we just stayed there talking and drinking. I just couldn’t get enough of talking because all the people on me week were amazing and interesting. 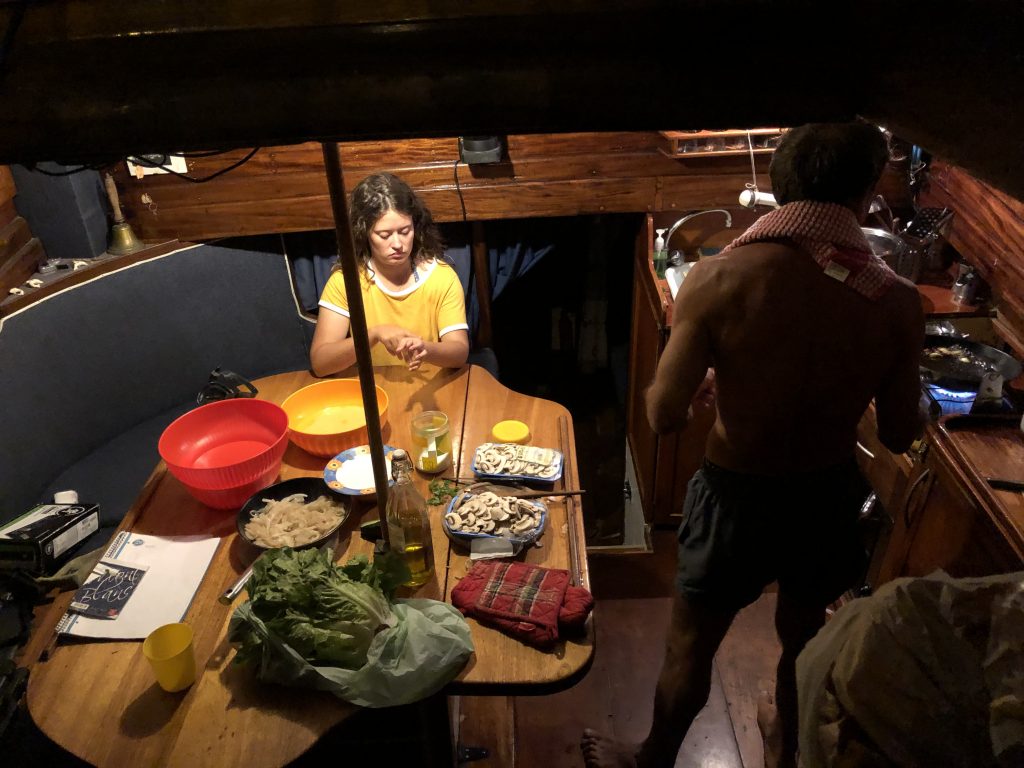 The project is very important from the scientific and conservation point of view because they do the monitoring of cetacean populations in Mediterranean which is surrounded my many countries and isolated from the rest of the ocean. There are many endemic species and populations, most of them are rapidly declining, some coming close to extinction. This happens because of overfishing, pollution, unwise regulation of marine traffic. Skipper Angelo was born on Ischia and lived there all his life and he can tell you a lot how it used to be. He said, that 20 years ago there were huge pods of common dolphins, when you see animals up to the horizon. Now you hardly see a common dolphin anymore, rarely 1-2 individuals occur in the group of striped dolphins. 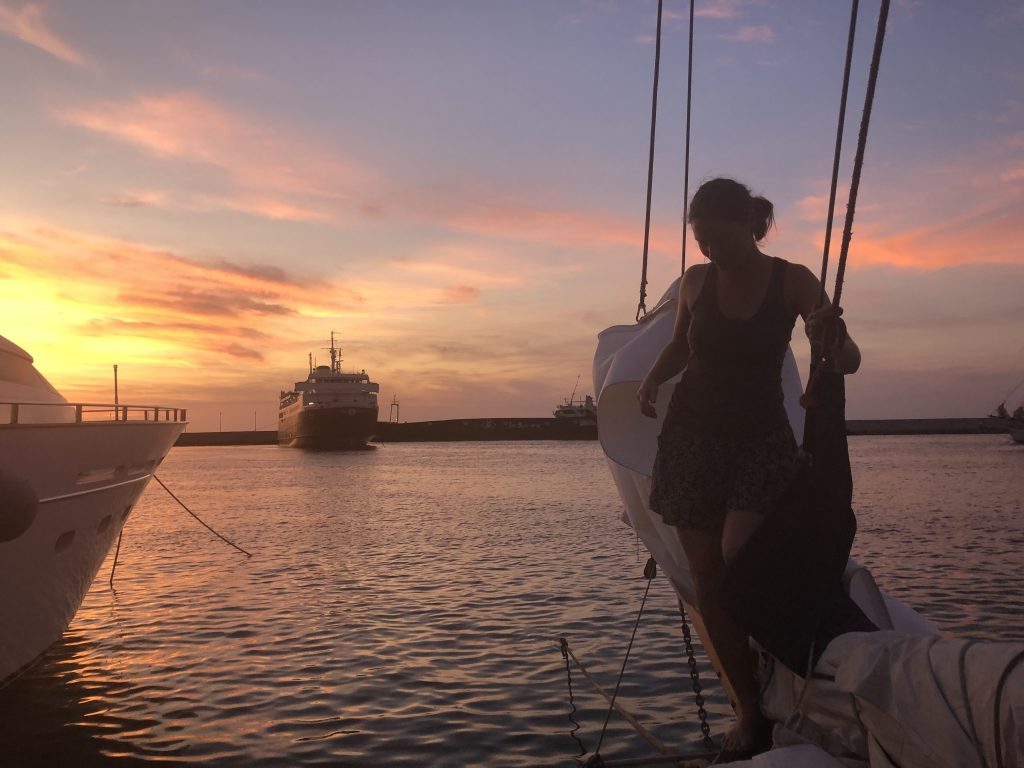 This is actually the saddest thing. The Mediterranean is dying. Most of the time you just watch the empty sea and struggle to find anything living in there. Not even jumping fish. During my week, we had only one brief sighting of the couple ofstriped dolphins. With the hydrophones, we heard occasional clicking of the sperm whale, but had never seen the animal. This was very sad and disappointing because I really wanted to get more experience in field identification of cetaceans.

Fortunately, we had lots of lectures on cetacean biology and identification provided by researcher Ash. He was working in this project almost every season for 5 years, so he has a lot of knowledge and experience. Also, he is a perfect lecturer and storyteller. I learned a lot from him and I thing we made good friends.

One day there were 2 m waves so we had to stay in the harbor. Some people went scuba diving in Ischia Porta, some with me included went hiking in the island’s mountains with Angelo. Hiking there is beautiful, there are rocks and forests and you can see so far into the sea that it is hard to tell where the sky begins.

Overall,despite the absence of sightings and lots of noise, this was a good experience. I would recommend this project to a friend as a first step on the way to cetacean research career, but not from recreational point of view. 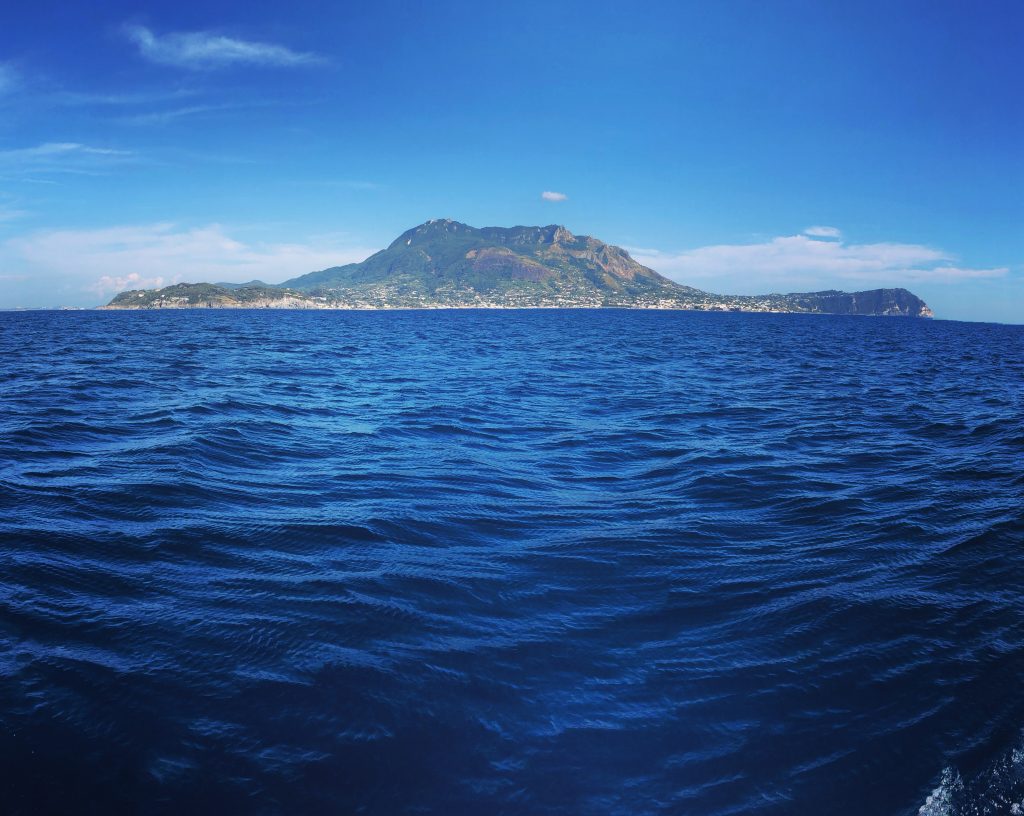