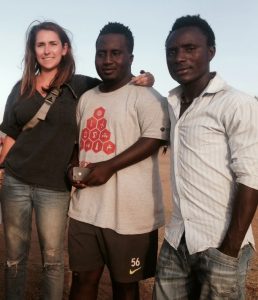 During my time in Uganda I spent most of my time at the Nakivale refugee camp.  Here I worked on projects that incorporated health and education. The camp is divided into zones. Each zone in the camp is assigned by country and each zone has a soccer team pertaining to their country.  I worked with the soccer teams of which were comprised of mostly boys from the ages of 18 to 25 and a few girls were scattered across the teams.  I have always been an avid football player throughout my life so I could relate to all the players in the camp. Many of these individuals were very misinformed about the facts and realities of HIV/AIDS. They did not know much about a disease that has infiltrated many aspects of their lives.  On top of spending time educating the refuges I spent time bonding with them.  When I was in the camp the World Cup directed the atmosphere. Each night we would go and watch the game with the locals. There was a large language barrier but that subsides when you are rooting for the same football team, laughter and screams soon drown out the barrier.

My time in the camp sparked a passions and concerns for me. I learned that the camp had clinics and personal to help distribute health necessities.  However, the camp did not have the money or equipment to implement such measures. We decided to organize a “Continental Cup” between the zones in the camp. The tournament would be called “Kick HIV/AIDS,” we wanted to have free HIV testing at the tournament for the players and the community. To help facilitate this I created a crowd funding campaign to raise money for the HIV testing equipment. I was able to raise $2,000 for the campaign.  This money provided testing to 400 people at the camp. This was a highlight of my summer and a highlight of my life.

The exponential positive outcomes of my time in Uganda can be attributed to the memories and relationships I formed with the employees of the project. Global Nomadic did an excellent job in pairing me with an organization that complimented all my dreams, needs, expectations, and more. I felt very respected by the whole team and we worked very well together. Now the employees call me “sister” and I consider them to be a part of my family as well. This project helped me acclimatize to the culture and Ugandan way of life. They took me under their wings and opened themselves up to a stranger, me.  My time in Uganda would not have been the same if I didn’t work with them.”