“During my placement on the beautiful island of Utila, I engaged in a multitude of tasks each contributing to scientific research and helping to raise environmental awareness among the local population to aid wildlife conservation and promote the sustainable development and extraction of their resources. 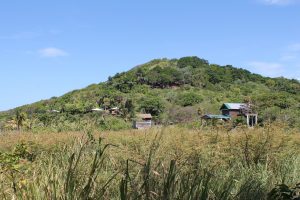 I assisted Daisy Maron with the population estimation study on the critically endangered iguana. This study aims to give an accurate description of the extent of the population on the island. Commonly called the swamper, the status of this species has just been reassessed to critically endangered. Out in the field, I was charged of catching iguanas and processing them in order to collect data. This included measures of the snout-to-vent length and tail length; identifying their sex; weighing them and tagging them with beads.

Another ongoing project is aimed at evaluating the extent of hybridization between this species and another more common species of iguana found on the island, the common spiny-tailed iguana. This is done by counting the number of “rings” of the tail of each specimen, as it is different in each species. 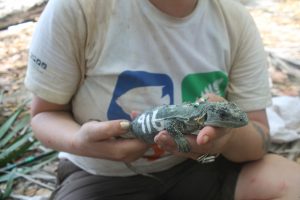 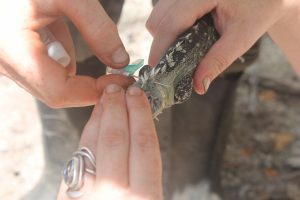 One of the scientists present at Kanahau works everyday with all seven schools present on the island. The children are taught biology and wildlife conservation with a particular emphasis on the wildlife found on their island. This aims to enhance their knowledge about the beauty of nature and help them understand its importance.

Along with Andrea and other volunteers, I have participated in the making of the Project “Eyes of Utila”. This project gives the opportunity to children in all schools to have a go at wildlife photography. Some classes were given cameras free of charge and a competition has been organised, congratulating the best pictures with prizes such as a digital camera, a diving course, cinema tickets, etc… The best 12 pictures will also be put together in a calendar that will be sold on the island.

See the official website to check out the pictures: http://forutila.tumblr.com

I have also worked on a project organised by ‘Think Beyond Plastic’ with the help of other NGOs on the island, which consisted of leading workshops in schools to make children aware of the danger of plastic and teaching them how to use less and recycle plastic. These two projects are definitely major successes as the children were very receptive and eager to learn more and participate, which gives hope for a change in cultural views of the protection of their wildlife on the island. 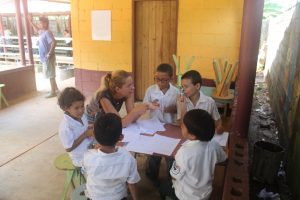 Picture: Me (Olivia) during a workshop at a school

At the centre, some work is also being done on orchid bees.

These bees are fascinating – the males are attracted to particular scents from the orchid flower and collect pollen from it. As a result, these scents (fragrances) accumulate on the males’ foreleg and are dispersed during their mating displays.

As shown by the picture below, me and some other volunteers have set up traps in order to collect the orchid bees and gather data. The bees are trapped using different scents sprayed on cotton pads that are hanged on a string in a bottle half filled with salt water and soap.

Camera traps were also laid out to find out whether our traps were successful in catching every orchid bee that was attracted by the scent. Unfortunately, the traps turned out to be unsuccessful, as most orchid bees that would settle on the cotton pad because attracted from scent would not actually be trapped and die. This is however part of the research process and encourages us to find better monitoring techniques. 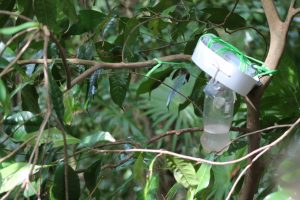 One of the scientists at Kanahau was doing her Masters research on identifying the nesting habitats of the swamper iguana. For this, we have laid out habitat surveying plots in areas where nests have been found as well as in areas where no nests were present (as controls). This was quite challenging physically because of the heat and unfortunately was not the most exciting project due to the repetitive tasks, however we made some interesting observations. For instance, we have noticed that iguanas were still nesting on beaches heavily polluted with plastic detritus. This gives hope for future management of the species.

Unfortunately, no work could be done on any of the bat species currently found on the island because the research centre was still waiting on the permit needed to legally survey and process bats. This was a let down at the start of the placement, especially since working with bats is advertised on the description of the placement.

However, we did check out a few caves on the island and I was very pleasantly surprised with the number of bats roosting in these caves – they were hundreds! This is still and important observation and assures that extensive research can be made on the different species found on the island.”