“This project was kick-started on Wednesday the 2nd of March during our Solar Mini Course. Initially the idea was to only replace a few of the broken panels from the system located behind the Solar Centre but quickly it became clear all the panels would gain from a look-over. Soon the project had extended to a complete rebuild of the sixteen panels as well as installing a new system of wires to hook up all the panels up to the building. 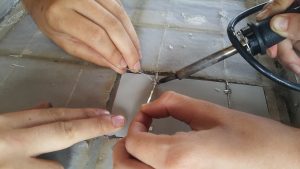 Hence we began taking down all sixteen panels. The panels are 18V, 3A, 60W. Two systems are in place at the Centro Solar. Four panels link to a charge controller at 18V from which the lighting of the building is run. The twelve other panels are connected to a second charge controller at 36V which runs to an inverter to provide sockets with electricity to run computers and charge phones and tools. The panels had been installed in 2007 and little to no upkeep had taken place since then. We were surprised to find ten still working since the rust and corrosion had turned many of the wires into dust. This signalled to us they not only needed a repair but a redesign.

The repair of a panel goes as follows. Firstly the aluminium frame and the lona (hardened cloth) backing would be removed. From there, the old silicon holding the lona on would need to be rubbed off. Once the glue had been removed the fault (or impending fault) would become clear. Normally water had reached under the back of the panel and corroded away at either ends of the connections to the cells. We cut off broken or corroded metal, soldering on new pieces to take their places and then replaced all the wiring with thicker twelve gauge strands.

Finally a new coat of silicon was applied to the back and after new lona was cut a fresh aluminium frame would secure everything back in place. This process was 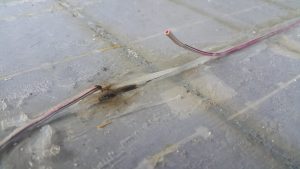 slow and it took two and a half weeks to eventually get through the entirety of the panels. Admittedly our progress was sluggish but we were hampered by rusted through bolts holding up the panels, false delivery claims of new materials and I suppose a lack of coordinated work on our part due to the other couple of projects that were on-going at the time. However the day before Easter break all sixteen panels were up and ready to be wired. 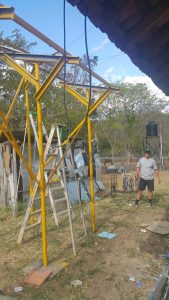 We had discussed wiring plans before Easter and we spent an afternoon writing up a project budget for the system. Essentially, tubing would be used to add structural support to the wires as well as it being visually pleasing. The newly soldered connections would be surrounded by ten centimetre pieces of PVC tubing filled with silicon glue to act as a sort of waterproof resin and prevent further penetration of rain into the delicate copper connections. Two long PVC tubes would run along the tops of the panels collecting all the wiring and, once they joined, a single tube would run from the panels over to the building.

A couple of days after Easter the budget was complete and the parts had come in. We setup the long PVC tubes, soldering up as much as we could before it as to be raised up into its final resting place. Once up, hours were spent on ladders slowly soldering together all the connections, mounting the tubing onto the metal and stuffing the gaps with silicon. We had few problems save broken drill bits and short wires running from the panels. Bits could be replaced but annoying the only way to fix the less than adequate wires was to add extensions which themselves required a small PVC piece to cover the newly formed connection in order to maintain the systems impermeability.

It took us four extra days to reach the final product including half a day of beautification of the wires and PVC. But what we have now is a much improved system with working panels, clean wiring and increased protection against water and corrosion throughout.”