From the Gobi desert in the North to the Himalayas in the South, and with the heady mix of ancient history and some of the world’s most iconic new skylines in between, China is a country of great contrasts. Perhaps though the greatest contrast is the one that exists between these rapidly developing cities and the countryside that they are leaving behind.

What is Important to You?

Some of the core differences between urban and rural China are not too dissimilar to anywhere else, although the scale of them may come as something of an eye-opener. There is a far bigger gap between rural and urban China than there is rural and urban England, for example. Some of the most noticeable aspects are to do with the basic living conditions and standards. While modern Chinese cities are set-up to cater for people from all over the world, with amenities, luxuries and imported goods to match, living in the countryside can sometimes feel like living in a previous era. This is not always a bad thing; modern Chinese cities are some of the busiest, most hectic and most polluted in the world. Living in the countryside is a more tranquil experience, with cleaner air and fewer people, but can you handle Chinese toilets, a lack of good night life, and a complete dearth of real cheese? Because good luck finding that in the (very) local supermarket.

It goes without saying that the salary in the city will be higher than that in the countryside. It should also go without saying though that not only will the cost of living be higher, but there will be more things to spend your money on. So how does it balance out? If you’re aiming to save during your time in China, is one option better than the other? The answer to this, and many other things in life, lies in how disciplined you are. Can you resist the temptations offered by the city? There might not be any Japanese restaurants in the countryside, but that also means you won’t be spending most of your salary in Japanese restaurants every month. You should also consider how far your salary will go outside the boundaries of where you’re earning it. Your countryside salary will be enough to survive while you’re there, but what about when you want to move on? What if there is an emergency that means you have to travel, or spend time in a bigger city? Will your small-town wages cover this?

How Important Do You Want to Be?

Living in the countryside, you may be one of only a few foreigners in your town or village. If this is the case, the local people will want to know you. They will be interested in you and will want to involve you in more of their lives. This might be come in the form of meals, drinking a beer together or saying hello (or just staring) as you walk past.

So Which is The Real China?

Both. While it may be tempting to label rural China as the real China, this would be an error. The cities are as much today’s China as the rice fields are, and with the rate of development as it is, will only become more so. Living in a Chinese city is no less real than living in the countryside.

Choosing whether to live in the big city or the countryside is something that you will have to decide for yourself, based both on what we have talked about here and your own personality. Both have their good and bad points, and you will need to weigh them all up before making your final decision. There really isn’t a wrong choice though, merely a choice that will be better for you personally than the other. Either will result in you having a wonderful experience that you will never forget, as well as helping to develop yourself and your career.

That is not necessarily a bad thing. Teaching a class of rural children who have perhaps never had a foreign teacher before is a wonderful experience, for both you and them, and can feel far more rewarding than teaching city kids, to whom you might not be quite so special. Any city will have a greater number of ex-pats living and working there. Depending on your point of view, this could be seen as a good thing or a bad thing. It’s always nice to know that there will be people in the strange place you’ve decided to live in that are in the same boat as you. People who can welcome you, relate to you, and help you. One danger here is how easy it is to spend all of your time with ex-pats, denying yourself the chance to really make local friends and living in a little foreigner-only bubble. 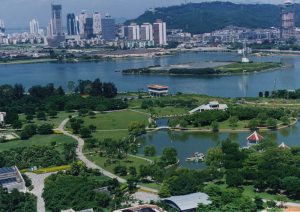 Of course, living in a big city will afford you more opportunities to find a job or internship. That isn’t only concerned with the number of vacancies, but also the variety. From office work to hospitality roles, to the ubiquitous teaching, the options are all there. Anybody trying to do similar in the countryside will most likely be restricted to teaching only.
Neither rural nor urban China should be missed when visiting the country. Everybody should see both, to get a more complete picture of this vast land. When living, working or interning there though, is it better to do so in a big city or the countryside?

Check out our Paid Teaching and TEFL training project in China to find out more about what you can do.