As I went through the sliding doors and onward to the outside world, the first thing I noticed was the heat. It was really warm. Especially given it was mid-March. I paused to reassess my grip of my two suitcases. As I did, I began to take in more than just the ambient temperature

Chaos. There were people everywhere. Taxis and buses were coming and going. Then a bit further away there were palm trees. Like a big, natural sign, welcoming travellers to their sub-tropical destination. Beyond them, mountains could be glimpsed in the distance. All framed by a huge, blue sky with not a single cloud. All around, the sweet sound of the Spanish language completed the scene. So exciting to finally arrive, but massively overwhelming.

I had just emerged from the airport on the island of Lanzarote. It was to be my home for the next 10 months. The plan had always been to deliberately make quite a big change. I had thought I was ready. I wasn’t. But not in the way you might expect…

Spain was an obvious choice as a first destination. The warmth of the climate and the people are well known. And as a Brit, at times it’s easy to find your home country lacking in both of those. So it’s easy to think that a change of scenery is a great idea. Of course, there is a lot more to it than that. Challenges are everywhere, from adapting to a new culture to missing your friends and family.

But if you know there are going to be challenges, you can plan accordingly, right?

When you decide to move abroad for the first time, you plan. A lot. There’s a lot to consider. Maybe this is just for a month. Or perhaps you’re thinking about a longer stint. The length of the trip, destination and reason for travel all factor into your planning.

You pack every conceivable item of clothing. Then there are all of the electronics and travel gadgets. Phrasebooks and guidebooks are important, not to mention fun to shop for. Of course, after endless hours of Internet research, there’s always something new that you haven’t considered before.

And that’s before you’ve discussed your awesome plan with all your friends and family until you’re blue in the face. Some of them think you’re crazy, others offer support without really understanding. If you’re really lucky, you’ll come across someone who has already travelled and might offer some good advice.

After all of this, you’re convinced you’ve planned for every eventuality and you set off out the door on your very own adventure.

So turns out you did a pretty good job in the planning stage. Nice work. The guidebook(s) you bought help you make the most of your time and find all the coolest places to go and see. You make new friends, explore new places and discover all kinds of new food and drink.

Bit by bit, you start to change. And you don’t even notice.

That language that seemed complicated when you first arrived becomes more familiar. It starts with the easy stuff you hear every day. Hi, bye, please and thank you soon become second nature. If you keep practicing and learning, you’re able to give strangers directions in no time. Then of course, once you’ve had a drink or two, you’re practically fluent. (Trust me, we’ve all been there). 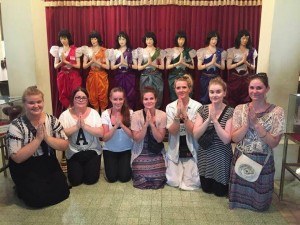 learning the correct customs in your new country will go a long way!

So, you’re overcome the language barrier. The next big change most people worry about is connecting with people from different cultures. How will you relate to them? What if you do or say the wrong thing? Well, turns out pretty much everybody you meet abroad is looking forward to meeting you. As you realise this for yourself, you’re likely to find yourself making friends left, right and centre. These people will expand your outlook faster than you can drink your new favourite cocktail.

Sounds good, doesn’t it? All that planning worked out well. You were ready. You have overcome the challenges of living abroad. In fact, you’ve had a great time. However, there’s one thing you didn’t think about. And that one thing is the reason you’re not ready to move abroad.

However long you move abroad for, you’re likely to do all kinds of new things. You’ll meet plenty of people, learn new skills and probably be confused on several occasions. But that’s just all part of your fun adventure. What nobody tells you is, that will all change when you head home.

The first day or two is usually just loads of rest and catching up with family. You’re exhausted. It’s been a long journey. Then it’s time to start meeting up with friends to tell them all about your adventure. After a few days, you’ll start to check Facebook waaay too often. Looking at pictures of memories you made along the way and hoping to stay in touch with friends you left behind.

Then finally, after a week or two, it hits you. You’ve changed. You didn’t realise it whilst you were there, but it was quietly happening along the way and now it’s smacked you in the face. Sure, it was nice to see everybody. You haven’t had to concentrate to have a conversation in English. Still, you tried to order coffee/wine/food and not only was it stupidly expensive, it just wasn’t the same as what you’re used to.

Guess what though? With time, you’ll figure it out. And this new person you’ve become is more capable than the one that left on an adventure.

You’re not ready to move abroad yet, because it will change you in ways you can’t even imagine right now. And nobody is ready for that when they start out. But that’s the whole point. However ready you are now, you won’t know what can you achieve if you don’t make a start.

You’ll be forced into situations that you’ll have no idea how to deal with. You’ll have immense difficulty explaining things to people. You’ll probably end up being embarrassed on at least a couple of occasions.

But the surprising truth is that you’ll adapt to all of that and have an incredible time doing it. You may come home a different person, but that’s the whole point. You’ll also have the most fun you’ve ever had.

And of course, that’s exactly why you should start planning right now. Living abroad will fundamentally alter your life in the most amazing ways. If you don’t do it, you’ll never know what you’re capable of.