When I, a complete stranger walk around Lobitos with my EcoSwell t-shirt on, I am met by smiles, waves and even calls of ‘Hola EcoSwell!’. As member of the team, irregardless where I come from, I am regarded as part of the movement which brought solar energy and a biodigester to the community hall, whose 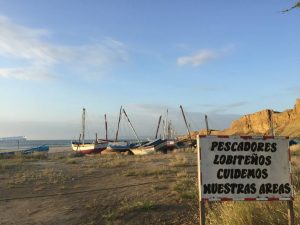 community afforestation project brought green areas to the desert, which brought healthcare and clean water in times of environmental collapse, who installed tide tables to optimise the work of the fishermen and much more. In three short years EcoSwell has become a fully integrated and celebrated part of the community of Lobitos, Northern Peru, no small task for any organisation.

Whilst some international volunteers in developing countries struggle to break free from the realms of well-meaning voluntourists and to forge a living link with their host town, through the realisation of projects which engage community stakeholders, from fishermen, to housewives, to local schools, hoteliers and surfers, EcoSwell has done exactly that. The team have directly impacted the lives of approximately 700 people, and indirectly double that figure. This has not gone unnoticed by the locals.

I first became involved with EcoSwell in November, 2015, when I had a few months earlier returned from spending half a year in Peru to continue with my final year of my Bachelors in Modern Languages. I receive 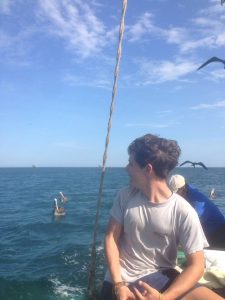 d an e-mail from Shadia from the organisation I had taught with in Lima and Arequipa, saying that she had recently been in touch with Michael, one of the founders of EcoSwell and that I might be interested. Coincidentally, Michael had studied at Newcastle like me and was giving a talk in our University that same week. I couldn’t make it, so I emailed him and we met on campus instead and over a café opposite the Students’ Union he told me all about EcoSwell. Hearing about how Michael, Andres, Diego and Alejandro, childhood friends from Lima with professional backgrounds in Environment and Social Sciences, Business and Engineering, left the City to form the organisation after visiting Lobitos for a surfing trip. They abandoned their lives in Lima and concentrated their efforts on creating an organisation which would bring positive and sustainable change to the community. This platform would allow them to accept, Michael told me, students and researchers from all backgrounds to realise their own projects here in Lobitos, or to contribute to existing projects as a general intern. Naturally, I was hooked, and that was before he’d even begun to describe the mysterious history and beauty of Lobitos. Its glamorous, oil-rich hay days, the military coup which collapsed the economy, its resurgence as a surf haven and the desert backdrop of the seemingly impossible Latin American dry forest. Keen to get involved in any way possible, I skype-met the whole team and we agreed that I could take charge of coordinating social media activities. 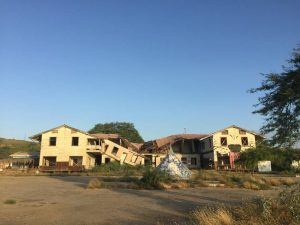 From my second home in the University Library, I followed EcoSwell’s activities and shared them with the online community, keener to see it for myself with every post. For a month or two at a time, volunteers would move into the EcoHouse and begin their research alongside the local experts, Alejandro, Diego and Andres and as varied as their projects were, from dental campaigns to solar power, drip irrigation to algae-harvesting, they all had one thing in common: their time spent in Lobitos had changed their lives for the better. After visiting for myself in April 2017 and spending one month in the delightful company of my EcoFamily, I couldn’t agree more. Seeing sustainable change being realised in such a direct way, meeting the people who call Lobitos home and being part of such a wholly positive organisation is not only refreshing, but inspiring. What’s more, on a professional level, the practical experience gained whilst here, so hotly demanded by employers nowadays, is the real deal. I have learnt about bureaucratic and practical obstacles to development, increasing environmental and demographic threats and attempts to curb them and, above all, I have been reassured that in an era where macro-pessimism seems second nature, the good things outweigh all the bad.