“Upon my arrival in Belize, I had no idea what to expect. I couldn’t wait to arrive at at the house where i would be living for the next month. After a long, long journey to Sarteneja i was greeted by Paul and Zoey in the village.

Myself and three other girls, who had also just arrived, piled into the back of their truck and we were off down a long, bumpy dirt road. The sun had just gone down so it was dark with not much to see, but the stars were as bright as ever. We walked into the house to see girls sprawled around the living room doing each other’s hair and some even had baby monkeys sitting on their head. Everyone was very friendly and pleased to see some new faces added to the group. “Watch out for rattlesnakes, if you step on one you will die” Zoey jokingly said as she walked me and bunkmate, Lauren, to our cabana. “what have i gotten myself into” I thought as i unpacked and settled in.

Baby manatee Kahleesi had arrived a few days prior to us and the night shifts were long and tiring. All the newbies jumped right into work the next day, with lots of help and support from the veterans who had been there weeks and even months longer than us. Each day started bright and early with the first monkey feed at 6:30am. We all met in the manatee house and would chop fruit and prepare their breakfast. Monkey feeds were four times a day, 6:30, 10, 2 and 4:30. Though some of us had signed up for the manatee part, we all helped out with both the monkeys and manatee feeds and cleans. It was my job to take care of the 3 howlers, Sparticus, Coffy, and Paz. Though at times i resented doing the monkeys, in the end I really did fall for them. working with them was a great hands on experience i would never get anywhere else and i am thankful for getting that unexpected position.

When we weren’t feeding the monkeys, our other responsibilities were with the manatees. Rameses, Duke and baby Kahleesi. Rameses would be fed everyday at 8:30am, 12:30 and 5:30. 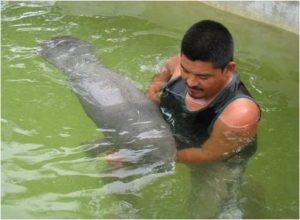 his tank also got drained and scrubbed daily. Duke had to be tube fed and that was once a day as well as his daily tank scrubbing. Kahleesi was still being bottle fed by Paul and Zoey. Working with the manatees was my favorite part. Rameses found a place in my heart and i am determined to make it back in a year to watch his release. Seagrassing was also an important task we had to do. Neto, the man in charge, would take us out on the boat in the lagoon and we would get buckets and fill them with seagrass. Returning with buckets of seagrass in hand, we would then fill each manatees square with seagrass so they could munch like in the wild.

This experience was probably the hardest and most memorable thing I have ever done. I met the greatest people from all over the world who gave me great laughs and support through the whole month. I learned a lot from myself and realized I can really do anything as long as i put my mind to it. Coming out of this experience i am more independent and open to more things that i never thought I could do. Once you live without running water or properly flushing toilets, (even vegetarian meals) you realize you can pretty much do anything life throws at you. I will never be afraid of another bug again, that’s for sure.  A big thanks to Paul and Zoey who have opened their house, lives and hearts to all the volunteers coming in as well as all the animals they care about dearly. The project is a diamond in the rough. I would also like to thank Global Nomadic for helping me find them and giving me the experience of a lifetime.”