“I recently returned from the island of Utila in Honduras where I was a research assistant at the Conservation and Research Facility. I highly recommend this trip to anyone who would love to gain fieldwork experience, especially with reptiles. However, there are endless opportunities to study other critters such as bats, insects, 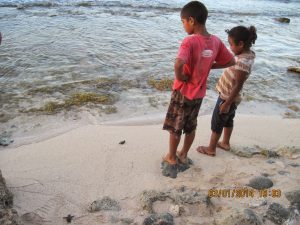 arachnids, herps, and the fish in the sea around the coral reefs there. Among other conservation related issues on the island, the main goals are to help research and protect the islands highly endangered endemic iguana known as the Swamper ( Ctenosaura bakeri) and to help set aside land via private reserves to protect them for future generations. Steven Clayson and Andrea Martinez run the project, they both have extensive knowledge of the Island and the many ecosystems and flora and fauna that live within it. Without the two of them, I would not have had such a great time there or learned as much as I did.

While there I helped with the ongoing population study where we captured, marked, PIT tagged, and used GPS to mark locations of iguanas found before we released them back into the wild. Habitat destruction and poaching are the iguanas two biggest threats.  I also helped take DNA samples from indigenous Boa Constrictors found in town before relocating them back into the bush and forests away from society. (There is a possibility that there is a subspecies of constrictors on the island due to their noticeably different color patterns.) I also was lucky enough to get to help a researcher there doing 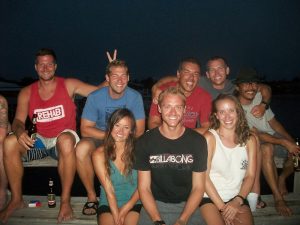 a project for her senior thesis. Courtney from Louisiana (also from Global Nomadic) was there for her 2nd trip to Utila, the 1st trip she was a research assistant as I was, but this time she was there to do her own project on host specificity of parasites found on the bats that live on the island. I learned how to use mist nest and got good at catching them with a hand net. (Rabies shots are required to hold the bats…these shots must be taken 3 weeks prior to arrival FYI.) I also learned how to use radio telemetry, GPS, and GIS equipment during my stay.

I met a lot of great people while there also. Darrell a local beekeeper took myself and Ludo (a researcher there from Holland) out one day with him to his hives, got us all suited up so we wouldn’t get stung and showed us the ropes of beekeeping. I got some fresh local honey from him that sells off the shelves at the local grocery store.  Maja was there from Canada working on a documentary about Utila’s environmental issues, If you would like to get a good feel for the island and what it entails look up her documentary on the Swamper called “In the Land of the Swamper.” It really paints a good picture of what one would expect, and what you would be there helping to do on the island.

Also, I became open water dive certified while I was there, might as well go a week early to learn if you’ve never had the opportunity to dive. Utila has some of the cheapest dive courses on earth, It’s a whole other world under the waves. Most of the tourists are there to do just that, to dive. Met a few people I still keep in contact with, some from London, Texas, Canada, Australia, Holland and North Carolina just to mention a few. 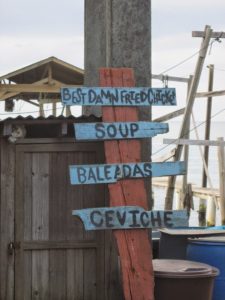 I feel like I could go on and on about my time spent in Utila…the simplicity of life there, the sunsets, the heat, the mangrove hikes, the baleadas( a local food, you must try Ms. Lydia’s stand in front of the bank,)the snorkeling and kayak trips with locals like Jose from the Iguana Station, the music, the untouched nature, and the nature that needs a bit of a helping hand. I had such a great time there I rebooked my flight so I could stay a week longer in paradise! I look forward to the day I get to return.

Jeremy and Elisabeth were great in helping me to plan the trip, and answered any and all questions and concerns I had. I’m glad I stumbled across Global Nomadic’s posting for the project while looking for internships to gain experience, it definitely reminded me why I decided to work with animals/nature in the first place ……..travel on yall! *Steph’