“Michelle had come to fruit chop to say goodbye to everyone. My hands were covered in dirt and grime from the water hyacinths, but she gave me a hug anyways; I made sure not to get my grubby hands on her nice white shirt. We quickly said goodbye, and she told me, “Have a really good time taking care of the manatees!” 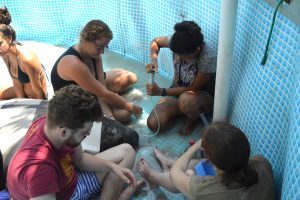 She probably didn’t know this at the time, but that resonated quite strongly in my thoughts for the next few hours and days. I have only been at the project for a little under a month now, but I have already seen the manatees take such large steps towards full recovery and release. Two of the big events were that a manatee named Twiggy was moved from a concrete enclosure to the lagoon enclosure with three other manatees, and Khaleesi has started soft release and has been out in the lagoon three times! In the day-to-day, it can sometimes be easy to lose sight of the larger pictures, but that simple goodbye did a lot to remind me that I get to participate in something that is larger than me, something that is making a difference, and something that is making a valuable contribution to legitimate needs in this area and around the world…..”