“My experience at this project is one that I will surely never forget. The journey in Belize to get there was full of winding roads with an amazing view of Belize. With the sun coming to an end, two other volunteers and I arrived in the small town next to the project. There waiting on arrival where Paul and Zoey, with their white pick-up truck. Are journey did not end there; heading to what seemed to be in the middle of the jungle we reached the establishment. The thousands of stars lit the sky, where the mirror image was reflected from the waters of the lagoon. 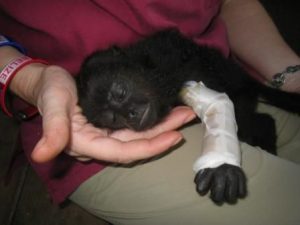 The early morning rooster alarm was my indicator of a completely new and exciting day. The monkey feed where the first on the to-do-list, where chopping fruits became part of the norm. While chopping fruit everyone would engage in conversation from our night into town, to the new insect we discovered in our cabana. The only difficult question I had to ask myself was “what monkey do I want to feed”? Ramses the Manatee was the next to feed; it was always a pleasure to jump in his pool, and give him a belly rub. Swimming with him and Duke (another manatee) where my forms of daily exercise; not to mention lifting Ramses which seemed like 200-300lbs, in and out of Dukes pool for interaction.

From the morning monkey feed to the manatee feeds, everyday there was something to do. In between there is a period of relaxation, where I was determined to finish my novel. I would have to say that my favorite part of the day was walking around with livy; a howler monkey with a dislocated arm. She would calmly lie on my shoulders, and we would walk around to her favorite sites. They have done surgery on her arm, and it looks like she will have full function of her arm. I thank everyone for the donations and the support, it fills be with such happiness to know that one day she can be released.

I would, in a heartbeat recommend anyone who wants to work with primates and/or manatees; whether it is for school, or for the sole interest of working with these amazing creatures. You learn so much, have a great time, and meet wonderful people. It is one place that feels like home without actually being home.”