“It was a late August afternoon and I was browsing the internet for some getaway opportunities. After a summer of routine waitressing, going away to a far away country seemed heavenly. I stumbled upon a‘Journalism internship in Mongolia’ ad and clicked on it instantaneously. The description seemed spot on. A career related internship in the most far away country I could actually come up with.

I went to bed that night thinking; yeah I’ll go to Mongolia!

And the strangest thing was that it seemed like a big idea that would demand a lot of planning. But somehow two weeks later I had my plain tickets and passport sent and I was all set to fly to Mongolia! I don’t think travelling to a country on the other side of the planet has ever gone so smoothly. At this moment I would say that Global Nomadic was a great organization for making the process so simple and clear cut.

The month itself went by quickly and adventurously. I became friends with a lovely girl and her family who offered me a room for the month.  I taught the girl English in the evenings. She was so interested in the language and it was her passionate hobby to master it. She often used the funniest expressions such as ‘Bring home the bacon’ or ‘On the gravy train’. Her family didn’t speak English, but we connected on a different level. I managed to teach them to eat Kelloggs. When I brought home a pack of cornflakes they all gathered around the pack and tasted it as if it was a delicatessen. In the evenings we would all quietly sit and watch Mongolian TV. Since I worked in a Mongolian TV station we would sometimes spot me on the camera, which got them very excited. 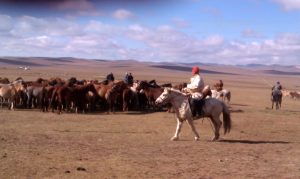 My work in the TV station was very fun. I would research for some stories and write them down. Then we filmed some shots, edited them and they were shown on Mongolian TV. I almost got an interview with the Mayor of Ulaanbaatar as I was writing a story about the changes in traffic. The traffic in Ulaanbaatar was the biggest culture shock. The people, who are otherwise warm and calm, drove around like ancient warriors. I also wrote a story about Mongolian fashion. The women have developed an excellent sense of style. And by researching their traditional clothes, which were both practical and eye catching, I could see where it comes from. Women’s clothing on the dusty streets of Ulaanbaatar were definitely sights by themselves.

While I was not being a journalism intern I tried to see as much nature as I could. The highlight of my spare time was riding a horse in the valleys on a warm autumn day. The sky was clear and it was so quiet. I sat on the horse and looked at the vast landscape that was surrounding me and I felt as if I rode back in time. Afterwards we were given some Mongolian food in a little ger. The best Mongolian food was a meat pancake called Khuushuur, I absolutely loved it. Their cuisine otherwise consists of strong titles such as, sheep skull, cow’s heart, fermented horse milk vodka and other fascinating ideas for home cooking.

I also went hiking to a hilltop, which was a two hour journey through snow. Somehow the landscapes always felt magical. I have traveled to many other countries but Mongolia had a certain amount of ‘out of this world’ feel to it.

In conclusion the month was a beautiful experience. From the smooth planning to a relaxing stay, it was an experience to remember for a lifetime!”