“On April 1, 2018, I set off on my first ever trip outside of the U.S. I knew I would be placed with an internship in Tena, Ecuador, and live with a host family but did not know much else. After three days of orientation with the program, I was assigned to live and work with the family and community just 10 minutes outside the city of Tena. My family operates a unique ethnobotanical park that has 15 acres of primary rainforest, an ethnobotanical garden, containing the most common rainforest plants, and a collection of caves that tourists frequent. 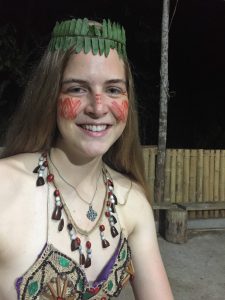 My responsibilities were to work with the family in their day-to-day tasks and also to observe and come up with a project in which I could use my unique skills to help them. The first few weeks, I observed and took in as much of the Kichwa culture as I could. I spent a lot of time with my host mom and her sisters crocheting and making artisan crafts. I was particularly interested in traditional medicine and and medicinal plants, so I gathered a lot of information from this as well.

Later in my stay, I began the project of creating a book of the most common plants in the garden. I interviewed many members of my host family about plants, which was incredible. They were able tell me so much about every plant in the garden just from their memory. With the help of a book that had descriptions of the plants in Spanish, I created a guidebook of 40 plants with Spanish and English descriptions as well as pictures of the plants from the garden. Other small jobs I helped with were creating labels for the different sections of the garden, routine cleanings of the park, and social media help.

Through my program, I also participated in project with a local school in Tena in which I and two other interns put on a three-class program about reforestation and the environment. Despite being surrounded by the Amazon, many of the children in the city schools did not know much about the rainforest or the plants in it! I was able to share the knowledge I had learned from my host family about medicinal plants with the students, and they were able to help me with my Spanish.

I definitely strengthened my Spanish skills. Along those lines, I believe I strengthened my communication skills, learning to communicate with my host family in a different language and with limited technology. I also gained confidence in not being perfect. I was super nervous to go into stores and speak poor Spanish at the beginning, but by the end I was going wherever I needed to, still with poor Spanish, but with confidence that I could get done what I needed. I also gained SO much knowledge about plants–recognizing them, some work with remedies and some work with planting them.

As a biochemical engineering major, I learn a lot about western medicine and how to modify things on the DNA level. Traditional medicine and this field are not 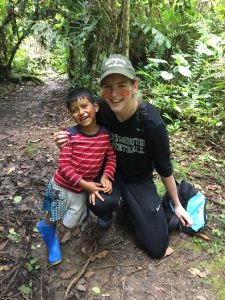 always combined as they could be. I can see there being some potential with bringing the knowledge I have learned from the Amazonian plants to the world of the laboratories. Additionally being introduced to plants in the Amazon has opened up a new field of study for me that I may pursue.

Additionally, this experience opened up my worldview 100 fold. Before this trip, I had never traveled abroad. I now have new respect for protecting our natural resources, understanding native traditions, and balancing the complications that come with building up a developing country. I often found myself mentally distraught while learning about the struggles Ecuador has endured because the values we strive for do not always line up with success. For example, the average US citizen is all for protecting the Amazon, not realizing that the reason our country found success was through destroying many of our forests. I began to see the US from other countries’ eyes. This and so many other dilemmas I had never thought of came to light in my experience.

One of the biggest takeaways from my experience was learning to drop all expectations, and learn to enjoy whatever life wants to bring. Frequently on my experience, I would wake up and have absolutely no idea what the day would bring. Even if I had plans for the day, they could change at any instant. Between the frequent rain, less efficient communication, and a slower lifestyle, nothing was ever set in stone in the Amazon. While this was frustrating at first, I learned to love it. I stopped worrying about what I had planned and learned to appreciate what was happening in the moment. I believe that this aspect alone has made me more resilient and significantly happier as a person. I learned to stop putting the value of my day on what I planned to do, and instead on what happened and what I learned from it. It was a great practice in letting go of things I can’t control and letting God and the spirits of the Amazon lead the way. And in the end, everything was perfect. I believe that this practice will help me immensely in the future. I no longer look at what should have or could have happened, but what did happen and how that can help me.

There was a lot I couldn’t control in Ecuador, so I quickly learned to let go and just live. Life was much more exciting waking up without having any idea what I was going to do that day. While that same attitude is not always plausible in America, I can definitely use this new attitude when there are things I can’t control or something doesn’t go as planned. When I was able to drop the could haves, and observe the is’s, I was able to enjoy the small things that before were hidden. I think this will help my anxiety in the future. Second, I gained a new appreciation for mental and spiritual health. Before coming, I had dabbled with meditation and yoga, but wasn’t sold. Learning about shamans, good and bad spirits, bad air affecting physical health, and so much more, I realized how important it is to be healthy in mind, spirit, and body. I haven’t been back in the US for a week and I’ve already attended two yoga classes. I’m excited to up my mental and spiritual health now. I believe it will help me on so many levels, including my athletic career! I also gained skills working with different cultures as this was my first experience abroad!”