“During my six-week internship at Levolosi hospital I assumed I would be shadowing doctors, learning from them, and possibly getting the chance to view minor procedures. It turned out to be so much more than I could have ever hoped for. My first day I was introduced to the head doctor, Daktari Alexander, and he immediately asked if I wanted to assist a C-section. With little to no medical experience I was ecstatic to be given this opportunity on the first day. But as Dr. Alex began the procedure I fainted. When I woke up, I was disappointed and so embarrassed. Thankfully, for the first time I was able to witness the relaxed, loving, and kind Tanzanian character that every person I met there possessed. I expected the doctor to be mad or annoyed but he laughed, gave me a hug, and said “Even happens to the nurses; Not to worry you will see again very soon”.

The days following I was worried I wouldn’t be able to handle it. I thought I would have to step back from the procedural side of the hospital work, even though it was what I most wanted to do. I knew I couldn’t miss these amazing opportunities the doctors at the hospital were so generously providing me. The second and third days I tentatively assisted an Implanon removal and a circumcision and after a quick breather near the cold air of the open window, I knew I was going to be fine. I was proud of myself and so relieved. A few days later I was prepared to re-attempt assisting a C-section and as I received, weighed, and swaddled the newborn with afterbirth all over my scrub shirt I was grinning from ear to ear.

I began to form a routine, observing and (amazingly) assisting and performing new procedures every day. I would walk 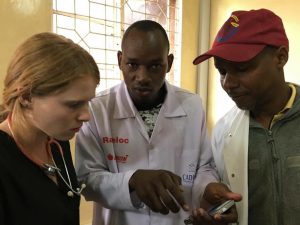 forty-five minutes to get to the hospital along side other volunteers who quickly became some of my best friends. Once we arrived, we would divide ourselves among the departments in the hospital. My closest volunteer friend and I usually worked in minor operations and quickly became close with the doctor that ran the department, Doctor Mosha. He was so relaxed and willing to teach us so we were able to learn minor procedures quickly, giving us a chance to actually make a difference. Doctor Alex prepared a weekly lesson in his office about whatever we wanted to learn, adding his hilarious personal twist on things that lightened the mood of some pretty heavy subjects. Some of the lessons consisted of HIV/AIDS, tuberculosis, and upper respiratory infections. His wide range of knowledge, lightheartedness, and humbleness allowed him to become someone I will always look up to.

When the hospital work was slow, I would learn from the doctors in the out-patient department. As they diagnosed the long line of patients in the wai 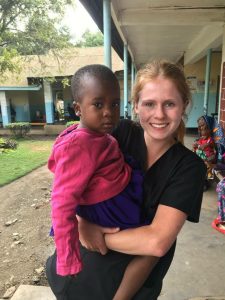 ting room, they would explain to me the patients’ symptoms, ask me what I thought they had, and even teach me some Swahili too. When we weren’t seeing patients it gave me a chance to really get to know them. We would usually go out to lunch when there was a break in work and they would take me and a few of the other volunteers to try traditional Tanzanian food. Working together for six weeks allowed us to get really close, and I’m so thankful to now be friends with some of the most fun, hard-working, and down-to-earth people I’ve ever met. I miss them every day.

Working in the hospital was the most rewarding thing I’ve ever done, and some of the best weeks of my life. I am beyond grateful to have experienced and have been a part of real-world medicine at Levolosi, but what was even more rewarding to me about my six weeks in Arusha was getting the chance to experience and learn from the kindness, selflessness, and love of life the people from the Tanzanian community possess, especially the community at the hospital. They made me fully understand that happiness really does come from your outlook of the life you have. The doctors at the hospital work harder than anyone I know but still find time to have fun and they are grateful for everything no matter what it is. They are paid very little but love their jobs because they get to help people and make a difference. I’ll always look up to them and I aspire to be as passionate about my job as they are one day.”