Below you can find her winning essay;

Welfare Without Borders: Cultural Differences Should Continue to Play an Important Role In The Perception of Animal Welfare Internationally

Animals play a huge part in every culture around the world. With many societies rapidly modernising and globalisation dominating day-to-day life, it is becoming more and more important to preserve unique cultures and traditions wherever possible. Variety within the human race enriches society and there is so much to be learned from different attitudes, approaches and practices around the globe. However, many of the traditions involving animals have welfare implications making it hard to define what is acceptable and what is not.

Animal welfare will always be a controversial topic. Welfare is a spectrum; there is no clear cut definition between good and bad. A person’s perception of welfare is based o 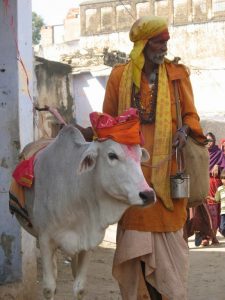 n their own experiences. If someone is used to seeing animals treated in a certain way, then that way will constitute normality, and therefore will be acceptable to them. In the developing world, working animals are often relied upon for the day-to-day survival of their owners. In some cases, the animal may be in very poor condition and possibly lame, however this suffering may be due to poverty rather than deliberate cultural practices. This presents a complex problem because if the animal continues to work it will be suffering, but if it ceases to work then both owner and animal will go hungry. These circumstances require owner education in a hope to maintain the animal’s health to the highest degree possible, even though welfare may still compromised as it continues to work.

The value with which animals are perceived varies significantly within different cultures. Several countries have highly-regarded traditional sports with serious animal welfare implications. The banning of fox-hunting in the UK was exceedingly controversial despite the unquestionable welfare implications for the fox. Similarly, there is no denying the suffering involved in practises like bullfighting, bear-baiting, dog fighting and dolphin slaughtering, yet people are willing to overlook it in the name of tradition.

Some religions stipulate specific ways in which animals should be treated, or slaughtered. Religious texts were written long before we had the facilities and knowledge we now possess, meaning that modern day methods have significantly improved animal welfare in comparison. There is a strong argument for certain traditions to be modified due to the ethical implications of consciously choosing a technique with poor welfare when a kinder method is readily available.

It’s incredible what can be achieved by modern medicine, however some cultures still champion traditional medicinal practices, many of which involve animal products. Harvesting ingredients for traditional medicine has nearly driven several species to extinction. In Asia, rhinos are hunted for their horns for use in Traditional Chinese Medicine. Rhino poaching leads to horrendous suffering and death, and subsequently some species of rhino are now critically endangered. Similarly, tigers are hunted for body parts because some cultures believe them to have mythical powers. Another practice causing immense animal suffering in the name of Traditional Medicine is the use of bile-bears. Both the conditions in which the animals are kept and the methods used for extracting the bile cause the animal great distress and pain. These are just a few examples of cultural traditions causing animal suffering when there are better and more ethical approaches available.

Livestock and domestic pets play a huge role in culture. In the farming industry, some more modern societies have a tendency to neglect animal welfare in favour of saving money. Intensive farming is common practice in most first-world countries, and there is no denying that the desired efficiency often comes to the detriment of animal welfare. The animals are vulnerable to many problems, including stress, chronic lameness and other injuries as a result of the overcrowding. Equally, the shift towards a consumerist culture is having an effect on our domestic pets. Obesity is a major problem among the human population and many owners inflict the same issue on their pets by over-feeding them. Obese pets generally have a decreased quality of life and are at risk of painful diseases such as arthritis and diabetes. As our culture become more and more about consumerism, are we ignoring the declining welfare of our animals?

A country’s wild animals undoubtedly contribute to its culture. The clash of the growing, modernising human population with nature and habitat destruction is an on-going debate and possibly one of the most prominent contemporary global issues. The welfare and preservation of wild animals in immensely important, but sadly involves significant human compromise which not everyone is inclined to make.

A person’s culture is part of their identity and is something that should be cherished; however animals should not suffer purely for the preservation of human tradition. We are an educated, knowledgeable race and do not need to inflict unnecessary cruelty on other species. Cultural diversity can be celebrated through art, food, language and countless other media without impacting on animal welfare. Changing, and even abolishing, cultural practises takes time, education and patience as they are often deep- rooted in societies. As professionals working abroad with other cultures, vets must try to suspend reliance on their own cultural background and use their training and experience to determine where the line between acceptable and unacceptable is. Cultural differences should indeed continue to play an important role in the perception of animal welfare internationally, but should never be used as an excuse to justify animal suffering.