“Not that long ago, in a former life, I worked as a Chief Innovation Officer for a publicly listed company where I wa 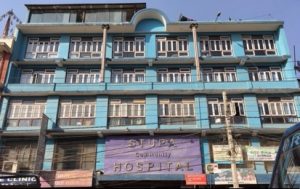 s charged with finding new technologies and business ideas. I travelled the world in business class, stayed at five star hotels and ate at fancy restaurants. I was living the dream, or so I thought. Eighteen months ago I quit to do my own thing(s). One of those things was a ‘start up’, Feedback Nutrition which is a public health enterprise. The idea is to use profits from sales of products in Australia to be used for public health interventions in disadvantaged communities. We have developed and registered a product to be sold in Australia but needed a ‘cause’ to invest our profits in to. In other words we had a great solution looking for a problem.

It turns out that developing a product is the easy part. Finding a project that would have an impact on disadvantaged communities was extremely difficult. After 2 years of searching without success, I decided I would investigate first hand what problems were facing developing countries and signed up for a medical internship program in Nepal with The Global Nomadic organisation . At very least I could help out – at least that is what I thought. 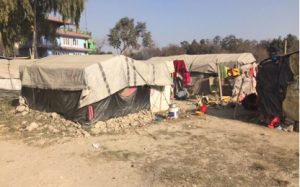 My discovery trip to Nepal could not be further from life in the corporate world I had became accustomed to. Firstly, I had to get used to a long haul in economy. Comfort is all about relativity and I got used to flat beds and 3-course dinners. It was clear those days were over. To add insult to injury I shared a room with 5 other volunteers and I was on the top of a bunk bed (I had lost the skill of getting up and down after 40 years). Each day I took a public bus to and from the hospital. In Nepal there is always room for one more person in the bus!

OK enough of the whinging! What emerged over the next month was nothing short of magical. Day two at the Stupa Community Hospital I met a very humble pathologist named Dr Ramesh. He was open, enthusiastic and friendly. Each day I would rock up early in the morning to the pathology department to get another lesson on Nepal’s health issues, disaster relief, the public health system and many diseases viewed through a microscope. I learned about Tuberculosis and Leprosy, both of which are very common in Nepal due to the poor housing and sanitation conditions. I felt like a student again. 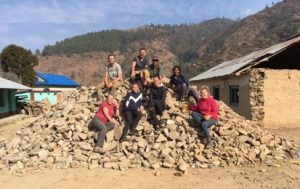 After a week of very insightful and interesting ‘lessons’ I was invited for lunch with Dr Ramesh and Dr Archana (Dr Ramesh’s wife who is a Obstetrician & Gynaecologist). Over lunch they disclosed to me work they had done with disaster relief after the 2015 earthquake. They had learned many things about remote health care and believed they had another exciting idea that would have a major public health impact on Nepal’s disadvantages women.

WOW! Where did this come from I thought? Although I was learning a lot from my volunteering, I didn’t feel like I was making any real impact. However, Dr Ramesh and Dr Archana had a real problem that they wanted to address and I had an idea on how I could help. More to come on this in the future I am finalising an indiegogo campaign to raise the necessary funds to kick off this cervical cancer screening program in Nepal.

For my last week of volunteering I decided to head out to Mate village, which is located in 5 hours truck ride outside of Kathmandu. Eight Volunteers, 9 locals and four goats (yes you read correctly and you can see them in the picture below) piled in the back of a Mahindra truck at travelled for 5 hours to Mate. We spent the week with a lovely local family, ate delicious local cuisine and worked on a school building project. The school was damaged in the earthquake. Using very primitive tools, a stream of volunteers will work over 2 years to take down the old buildings and build new ones. Our crew dug for a week. 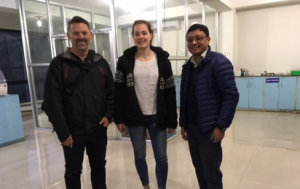 When I travelled the world working in a corporate environment I met some amazing people and listened to some fascinating ideas. However, I also met some sharks, obstructers and myopic executives that diluted the chance of any real progress or innovation. My volunteer experience has revealed to me that when we take away all the BS and politics we get to the heart of innovation – a big problem, limited resources, creative ideas and passionate people. My volunteer experience gave to more than I feel I gave to it. Through my #HelpYourselfHelpOthers campaign I hope to turn that around so that I am giving more back than taking away. Thanks to Global Nomadic, The Green Lion, Feedback Nutrition, all the seriously cool volunteers, Stupa community hospital, residents of Mate and finally Dr Ramesh and Dr Archana.”

Dr Craig Patch is Chief Giving Officer at Feedback Nutrition which is a public health enterprise focussed on improving health outcomes in developing countries. He is also CEO of verNx biotechnology which is pioneering the research and development of branched fats found naturally in vernix caseosa. He has a PhD in Biomedical Science, MBA, BAppl Sc and Grad Dip Nutr Diet. He is committed to developing science based nutrition solutions to improve health and wellness.