“As an individual who subscribes to Western cultural values, interning at a low-income, Tanzanian hospital was both ethically challenging and extremely eye-opening. I was able to gain global medical experience, learn how to interact and empathize with different cultural groups, as well as solidify my future career aspirations. 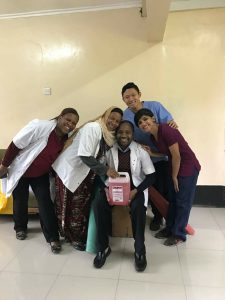 In terms of my responsibilities at Levolosi hospital, my job as an intern was to primarily assist the local doctors with their diagnostics and their surgical procedures. This would range anywhere from filing administrative paperwork to dressing wounds to assisting in live births. Because there are not nearly as many regulations in the hospitals, I was also able to do much more here than I would have been able to in a more Western hospital. I was allowed to suture (I declined any offer to so because I felt it would be unfair to the patient), and after holding a pair of forceps during a circumcision, the surgeon told me, “Now that you have seen one, you can do the next one by yourself!” I, of course declined this as well for the same reason, and because I also felt the procedure was beyond my scope of practice as an Emergency Medical Technician and an undergraduate student in the USA.

While assisting and observing these doctors was already a very valuable experience, I also wanted to find more ways that I could contribute to the hospital. Over time, a group of us interns realized that government hospitals such as Levolosi often do not have sufficient funds to purchase essential health supplies. Many of the operational equipment are not sterilized between uses; wounds are cleaned with no antiseptic due to shortage of iodine; wounds with muscles and tendons showing 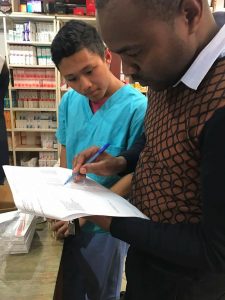 are not treated with anesthetic, etc. Before us, there were already two volunteers who raised 2,500 euros worth of supplies in the month before, and with this money, they were able to buy an incredible amount of supplies to alleviate some of these issues. Even with these donations, however, there were still a significant shortage of supplies, so as a result, I co-started another fundraising campaign in order to raise awareness and to bring further donations to the hospital. We ended up raising approximately $1,730 USD, and we were able to purchase antiseptics, gauze, Mackintosh bed sheets, gloves, the list goes on. In total, between my fundraising campaign and the previous one, we were able to raise approximately $4,500 USD worth of supplies for the hospital.

From a cultural standpoint, it was also very fascinating to see the vast differences between Tanzanian medical practices and Western medical practices. In America, one thing that I have learned is that as a physician, physician-patient rapport is extremely important. We do not just treat the patient’s complaint, but we treat the patient, as a human being. In Tanzania, however, that mentality is absent. Doctors very rarely show empathy (although there are those who do as well), and it is not uncommon to see a doctor yell at a patient if the patient is not cooperating. In addition, if the patient does not pay at the reception, doctors will turn them away until they do. In some of these cases, it is very difficult to watch, and on several occasions, I have helped patients pay for their treatment (sometimes patients cannot even afford 3,000 tsh, which is the equivalent of $1.34 USD). As I looked more into it, I began to understand that this lack of empathy is because doctors are often paid by the patient, and a result, they try to get through as many patients as they possibly can. In a poverty-stricken country like Tanzania, everyone here is out to make even a little more money to put food on their families’ tables. 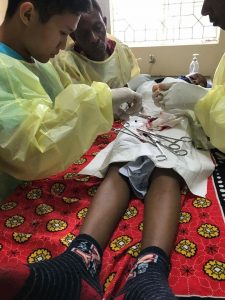 As I was having a conversation with the head doctor of Levolosi, I asked him why he chose to work at Levolosi hospital. The answer he gave was that he enjoys providing health in places of the lowest-income. While this may not seem like much, it was exactly what I needed to hear to affirm my career dream. For the past 2 years, I have found that my passion is to combine medicine and travel, as I wish to become a global physician. My dream is to travel and start clinics in places that do not have sufficient healthcare, and seeing this head doctor feel proud of his accomplishments made me realize that that was exactly what I have been searching for as well.

Overall, this entire experience has been invaluable to me and I have not only learned a lot about the medical profession in other countries, but about what I want to accomplish in my life as well. Being a part of a global experience that is tailored to your future goals is something that I would recommend everyone to experience at some point in their student lives.”

I am currently a Second Year undergraduate student on the Pre-Medicine track, with an intended Global Public Health major and a Social Entrepreneurship minor. My dream is to become a global physician, travelling the world and starting clinics/hospitals in places with insufficient healthcare, as well as mentor local medical students to take over these clinics/hospitals. In the further future, I may also want to become a teacher.